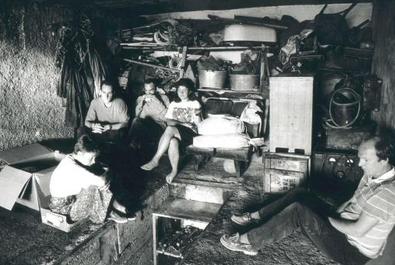 The Merlin History Project team is being managed by Merlin's former Evidence and Impact Adviser who recently transferred to Save the Children. He is supported by a five member Steering Group.

Following an initial workshop with selected former staff in June 2014, the Merlin History Project formally commenced in August 2014. Phase 1 focussed on gathering material from archives, interviews and personal document collections to construct a narrative 'spine'. Phase 2 running from November to December 2014 will solicit additional information from staff, trustees, supporters, partners and observers of Merlin's work via this website and through additional interviews. During December 2014, areas of particular interest will be selected for more detailed description and analysis. Drafting of a written account of Merlin's history will take place in January-February 2015 and the draft will be reviewed by an Editorial Committee. The final report is scheduled for completion in March 2015.

Despite Merlin's significant role in many international humanitarian operations and in efforts to combat diseases such as TB and Lassa Fever, a consolidated, publically available account of Merlin's history does not exist.

The current process of Merlin joining Save the Children UK presents a logical moment to compile a history of the agency, to reflect on its experience of providing humanitarian assistance often in dangerous contexts and recognise its contribution and those of its staff, trustees and supporters. Merlin's 21 years corresponds to a remarkable period of expansion in the international humanitarian sector and so its history will also provide insights into the issues, pressures and opportunities faced by humanitarian agencies during this period.